The Workers Unite Film Festival is a celebration of Global Labor Solidarity. 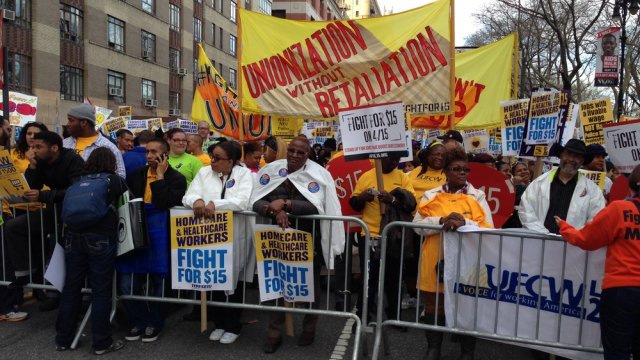 The Workers Unite Film Festival aims to feature student and professional films from the United States and around the world. These films highlight and publicize the struggles, successes and daily lives of all workers in their efforts to unite and organize for better living conditions and social justice. We hope to illuminate, educate and motivate audiences to take action. In these last few years, unprecedented attacks have been launched against unions and workers’ federally mandated rights to organize, by well-funded corporate lobbies such as ALEC. Despite these well organized campaigns, workers continue to courageously challenge these attacks by raising their voices with determination and with unity.

Since the fraudulent election of the anti-worker Trump, the right-wing agenda is following the Wisconsin/Koch Brothers model of a major attack against unions and workers' rights to organize. This is true in many other states in the U.S., where anti-worker politicians, funded by such corporate supporters, have looked to roll back the clock on workplace dignity and rights. By endorsing the Big Lie of ‘Right to Work’ statutes, politicians such as Scott Walker and Trump have made it clear that their interests are not now and never will be those of the working class. They serve the 1% of the 1% and will take their money and do their dirty work while lying to workers about a better future.

Meanwhile, the Fight for $15 has surged to become the largest low-wage worker movement in US history. We will again join with the hundreds of thousands of marchers on the streets on May Day 2017 to demand fair wages and livable wages and benefits for all working people. The goal of this 2017 Workers Unite Film Festival is to bring the stories of brave workers from around the globe to an engaged, passionate, and diverse audience in New York City. The worker's voice must be brought back into popular culture in order to be heard. Now more than ever, Labor Rights are Civil Rights, and in the chorus for change, every voice matters.

Anti-Family and Anti-Worker Budgets do not succeed. Don't be fooled! The budget now being pushed by the GOP is a further shifting of taxes from the top 1% down to what remains of the working middle class and the working poor. Nothing in this budget document does anything to save our economy, rather it furthers the plundering of our community assets by those already legally avoiding their fair share of taxes. No cuts to Medicare/Medicaid, no cuts to Pell Grants, no cuts to school lunch programs, no cuts to senior assistance programs.